I have decided to share with you what I wrote more than 5 years back! This post is the second part of a 3-part series.

Back in 2011, while I was still in the second year of my undergraduate college, I had the audacity to write a monograph. I named it ‘Tryst With Destiny’. In the last chapter titled ‘Another World Is Possible’, I aimed to show that the present world of violence, unfreedom, injustice, unhealthy competition and mass xenophobia is not inevitable[1] and that another world is possible.  For that purpose, I used no new concept. Instead I revisited very briefly some well-known ideas like identity, freedom, justice, democracy, non-violence and Satyagraha, and tried to re-think our 21st century problems through the prism of those concepts.

Most of what I wrote cannot be published here without sacrificing my intellectual repute (if any is still left after these stupid blog-posts). But my writings on Freedom, Identity and Non-violence seem to me not altogether useless. That’s why I am going to share those with you.

I will exactly reproduce what I wrote back in 2011 without any editing. So there might be some references to events (particularly Indian ones) which were burning issues in 2011. And last but not the least, forgive my naivety. 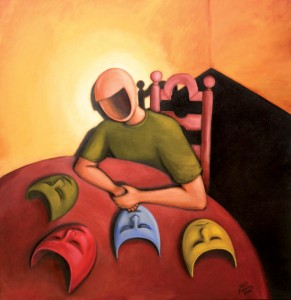 The answer to the self-query “Who am I?” is not as easy as you might be allured to think at first. Am I only my physical body or my mental states? Do I want to identify myself only with the sorrows in my life or only with the happy moments of my life, or all the experiences in general? Who am I to myself? Who am I to my relatives? All these questions are very intriguing but I shall opt to remain silent on this issue. At the risk of some over-simplification, we can say that the answer to the question “Who am I?” is my identity. Every person on this planet has his or her own identity and it needs no special mention how important our identities are to us and how significant is our freedom to choose or make our own identities. However, the question is “Do we have a single identity or multiple identities?” Moreover, one may even ask, “If we do have multiple identities then are these identities mutually exclusive or not, that is, do multiple identities collude to form a big monolithic block of multiculturalism or do they survive as mere plural monoculturalism?” Let me try to answer these questions one by one with suitable real life examples as and when required.

I begin with a very short description of an idea, which has gained ground in recent years all over the world; but here it can be a bit out of the context of identity, to begin with. The idea is that of ‘clash of civilizations’.

According to the political scientist Samuel P. Huntington, the so-called father of the theory of ‘clash of civilizations’, people’s cultural and religious identities will be the primary source of conflict in the post-Cold War world. To put it in his own words, he gave a “descriptive hypothesis as to what the future may be like” and in doing so, he argued that, “the fundamental source of conflict in this new world will not be primarily ideological or primarily economic. The great divisions among humankind and the dominating source of conflict will be cultural. Nation states will remain the most powerful actors in world affairs, but the principal conflicts of global politics will occur between nations and groups of different civilizations. The clash of civilizations will dominate global politics. The fault lines between civilizations will be the battle lines of the future.” To establish his point, Huntington divided the entire world into different regions in terms of the predominant religion, as shown in the figure above. Bolder lines in the figure represent relationship that is more conflictual. However, such civilization clash hypothesis is essentially flawed in the post globalization era of world politico-social structure because virtually there exist no distinct cultural boundaries in the present day. Ignoring the interactive dynamism inherent in cultural interdependency, Huntington’s theory fails to bring out the fact that civilizations or cultures are not “self-enclosed”.

Civilization is itself a necessary consequence of changes that take place in the volume and density of societies. If science, art and economic activity develop, it is as a result of a necessity imposed on men; it is because there is no other way for them to live in the new conditions in which they are placed. From the moment that the number of individuals among whom social relations are established reaches a certain point, they can only sustain themselves if they specialize more, work more, and stimulate their mental capacities; and from this general stimulation there inevitably results a higher level of culture. From this point of view, civilization thus appears, not as a goal, which moves people by the hold that it exerts over them, not as a good perceived and desired in advance, which they strive to create as fully as possible, rather, it is the effect of a cause, the necessary result of a determinate state of affairs.  Therefore, human civilizational evolution cannot be brought to a mere conglomeration of conflictual cultures.

In other words, Huntington bases his argument on an assumption, which I prefer to call “identity statism”, that is, an assumption that cultural identity of a group or an individual remains unvarying over time and cross-cultural interactions. Such identity-statism is precarious by its absence in the real world. The reality is that of a huge human civilization with varying religions, languages, socio-political structures and economic status across the globe and not a mere “imagined geography” of isolated belligerent cultures. What I am trying to say is that attempts to subject human civilizational history to narrow factionalism and parochialism along the line of different cultures are essentially flawed because of the deliberate and false oblivion of dynamism in civilizational identity.

Moreover, Professor Amartya Sen has denied Huntington’s theory on the logical ground that people cannot be classified according to the civilizations to which they belong. Whether or not different civilizations are mutually antagonistic is a matter of secondary concern, but the very concept of reducing or confining the identity of a man only to his civilizational or religious affiliation is flawed in the first place.

Probably due to the spread of Islamic terrorism in recent years, quite often people nurture a notion that members of the Islamic civilization have an intrinsically belligerent culture. Their judgement is not only wrong but also misplaced. The question to be asked is not whether Islamic people are violently belligerent but whether a Muslim person is engaged in warfare because of his religious identity. The same Muslim person may be someone’s father, some woman’s husband, a businessperson, and an Asian. All these co-existing identities of a single person are suppressed when we make statements like “Indians are tolerant”, “Muslims are violent”, “Asians are spiritual-minded”, etc. Thus, we understand that reduction of a person’s identity to singular affiliations is wrong and may even give rise to vicious fundamentalism owing to the attachment of too much importance to a particular identity of a person, subverting all others.

The rise of the politically active Hindutva movement in India under the aegis of the political parties like the BJP (Bharatiya Janata Party) and the Shiv Sena, along with their religious counterparts, the RSS (Rashtriya Swayam Sevak Sangh) and the VHP (Vishwa Hindu Parishad), can serve as a very good empirical study for examining the idea of identity. According to the leaders of this movement, India is a land of the Hindus and the civilization of India is essentially a Hindu civilization. Thus, according to them ‘Indianness’ should be reduced to ‘Hindutva’. They even tried to bypass the fact India is presently home to nearly 145 million Muslims and other religious groups, who form an integral part of Indian society, culture and civilization. Like every country, India too has her religious minority, but that does not mean we shall have to expel them and form a ‘pure’ Hindu state. To establish their claim of Hindu supremacy and the exclusivity of Hindutva, the BJP-led government of India (1998-2004) even tried to rewrite the country’s history according to their terms — in the NCERT[2] issued schoolbooks, Indus Valley civilization became the “Indus Saraswati civilization” with the civilization being named as a brainchild of the ‘Sanskrit-speaking composers of the Vedas’, new instances of ‘Vedic mathematics’ and ‘Vedic sciences’ found place in the list of India’s civilizational achievements and to top it all, the pseudo-historians or the big bluffs even claimed to have found a Indus Valley terracotta seal with a picture of a horse on it, reinstating the belief of the Vedic or Aryan or Hindu connection with the Indus Valley civilization.[3] We have all seen how this exclusive concentration on the religious aspect of India paved the way for the 2002 Gujarat riots, led by the Bajrang Dal, a violently energetic youth wing of the VHP. Thus, we can understand that attachment of too much significance to any single identity can lead to violence. It is not a question of whether economic class structure[4] or civilizational difference or some other factors are creating violence, rather it is a matter of the illusion of exclusivity of human identity that is creating violence in the world. If we can propagate the message of multiculturalism instead of mere coexistence of disjoint monocultures or even worse than that — complete absence of the identification of multiples identities, then we can hope to move a step further towards our goal of achieving the ‘global village’.

[1] “W.B. Yeats wrote on the margin of his copy of Nietzsche’s “The Genealogy of Morals”, “But why does Nietzsche think the night has no stars, nothing but bats and owls and the insane moon?” Nietzsche’s skepticism about humanity and his chilling vision of the future were presented just before the beginning of the twentieth century. The events of the century that followed, including world wars, holocausts, genocides and other atrocities, gives us reason enough to worry whether Nietzsche’s skepticism about humankind might not have been just right.” — “The Idea of Justice” by Amartya Sen (2009)

[2] NCERT stands for National Council of Educational Research and Training

[3] One of the main achievements of the Indus Valley Civilization was its colossal expanse. It covered a much larger area than the contemporary Egyptian and Mesopotamian civilizations. However, since much of its area fell in the present-day Muslim-dominated Pakistan, the champions of the Hindutva movement found it more prestigious to restrict the Indus Valley civilization to only the Saraswati river valley in India. Moreover, the Indus Valley civilization flourished much before the ‘Sanskrit-speaking’ Aryans arrived in India. Therefore, their chronological facts were also jumbled up while ‘rewriting’ Indian history. The testaments of Vedic mathematics and Vedic science were totally absent in reality and the horse on the terracotta seal was later found to be a simple fraud based on a computerized distortion of a broken seal of a unicorn bull. The list of false historical evidences and facts is much longer, but these highlighting points regarding the distorted history of India’s premiere ancient civilization should suffice for my purpose.

[4] Karl Marx himself subjected the unique identification of people as either ‘haves’ or ‘have-nots’ to severe criticism in his “Critique of the Gotha Programme”, in 1875. The German Workers Party’s proposed plan of action, known as the “Gotha Programme” said explicitly, “[U]nequal individuals (and they would not be different individuals if they were not unequal) are measurable only by an equal standard in so far as they are brought under an equal point of view, are taken from one definite side only, e.g., in the present case are regarded only as workers, and nothing more is seen in them, everything else being ignored.”